One of the best Gameboy Advance games ever to come. -Review by Streex

Pokémon is a brand that has spawned many products which include lunch boxes, shampoo, food products, toys, movies, TV shows, comics, clothing, trading cards, and a lot more. Even now in 2014, the franchise is stronger than ever. One of the things that I really like about the game is that you don't even have to know the history, or play previous Pokémon games, to enjoy. Anyone can just pick it up, play it, and feel comfortable with it. It is one of Nintendo's best on-going series.

The controls are good. They are very responsive and set up well. Overall, great controls. The gameplay is fairly simple. You go across the huge world, catch Pokémon, trade Pokémon, train Pokémon, level up Pokémon, battle Pokémon, and anything else that you need to do to gain the rank of Pokémon Master, which will take a long time. 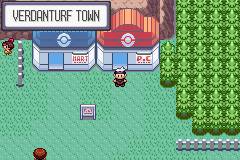 Pokémon Ruby Version is actually one of two games that are basically the same except for minor differences. Pokémon Sapphire is the twin brother of this game, something Nintendo has done with the series since the beginning. When you start out, you have a choice of three different Pokémon to start with on this long journey that you will happily endure (after you do a few tasks). You have a choice of Torchic, Mudkip, and Treecko. After you pick one, the game begins.

At first you have no Poke Balls, so all you can do is go around and battle and talk to people. When you start out, your Pokémon will only have a couple of attacks and they are really weak. To build up your Pokémon's attack strength, you need to battle more and more, or use a Rare Candy, which is an item that automatically makes a Pokémon level up one point. As you level up a certain Pokémon, that Pokémon can learn new attacks, which can be used in battle. You can only have 4 attacks at a time so you need to figure out which ones you like best. There are a few different attacks for each Pokémon that can be learned.

After a while of talking to people, battling, and other things, you will finally get a Poke Ball. The fun now begins. This is where you have to start catching Pokémon, training them, and getting ready to battle some of the bigger bad-ass trainers in the game (a trainer is someone who, well, trains Pokémon).

When you battle, a screen comes up that shows the two Pokémon that are battling. You can call back a Pokémon or run away at any time during a battle. When you call back a Pokémon, you can enter another Pokémon in a match against the one that you were just fighting. A Pokémon's life is based on a hit points system. Each has hit points and loses life according to how skilled your Pokémon is and how skilled the Pokémon that attacked it is. To recover Pokémon, you send them into their poke ball and bring them to a Pokémon Center, or use a potion on them. 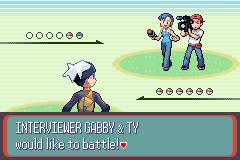 Anyway, back to the battling. Each player takes a turn to select an attack. Sometimes, Pokémon can block attacks that are done by a Pokémon that are lower in level than them. You take turns until one dies or one trainer loses all of their Pokémon. To attack, highlight the attack you want to do and select it. That's about it. In addition to the previous game's battle systems, there is one big addition; the abilitity to battle more than one Pokémon at the same time. You can have 2 on 2 Pokémon battles, which is extremely fun. The battle system is very addicting.

When navigating the world, you can go inside some houses, caves, and other areas. You can interact with people too and talk to them or battle them if they want to. Each town has their own training gym. In a training gym, you will have to face Pokémon trainers of great skill. If you beat them, you will get rewards like items or new abilities. These abilities are used to reach more towns. Some abilities you'll need are strength and surf, but there are a lot more. The environment looks very detailed for a GameBoy Advance game from the moment you set foot in Littleroot City. Overall, the level designs are creative and unique from one another. The Pokémon and character models are also top tier. Even though it probably doesn't sound like it, there really is a lot of depth to the game and a lot of things to do. If you want, you could just go around and catch Pokémon, explore the world, talk to people, and battle. Once you beat the game, you still have to beat the game with 2 other Pokémon from the beginning. This adds to the replayability. Now, just start over and train some more. You can have multiple saves, so don't worry about losing your game data. The replayability is high just like all Pokemon titles. The game is easily a fifty plus hour game on your first time through. It takes a long time to complete and master every aspect of the game. It will take you even longer to catch all 151 Pokémon too. To add even more replayability, you can link two GameBoy Advances together and battle or trade Pokémon with friends. This is really fun when both opponents are evenly matched trainers and good at the game. Overall, the replayability and the gameplay are both fantastic.

There really is no story. At the beginning of the game, you first type the name that you want to call the trainer that you play as. Throughout the game, you are just on a quest to be a Pokémon Master and the best Pokémon trainer in the world. There are some side quests though. Dr. Birch, the main Pokémon guy in Littleroot that has a niece will battle you several times throughout the game. Your ultimate goal is to beat everyone at the Pokémon League.

The graphics are very good. Everything looks detailed for a GameBoy Advance game, and on the GameBoy Advance SP, it looks even better. The music and sound effects are impressive through the tiny GBA speaker, although the music will probably get on your nerves after a while. By no means is it bad, you just have to listen to it for long periods of time.

Overall, this is probably one of the best games ever made. It is exciting from the first hour through the hundredth hour. If you still have a GameBoy Advance lying around, give this game a shot. You will enjoy it immensely. Pokemon games haven't changed too much over the years, but it's always nice to go back and experience the roots of the series. With that said, this is one of my favorite games on the GameBoy Advance.

- Lack of character animations in battle

Oops, you forgot something.

The words you entered did not match the given text. Please try again.

Oops! This site has expired.

If you are the site owner, please renew your premium subscription or contact support.